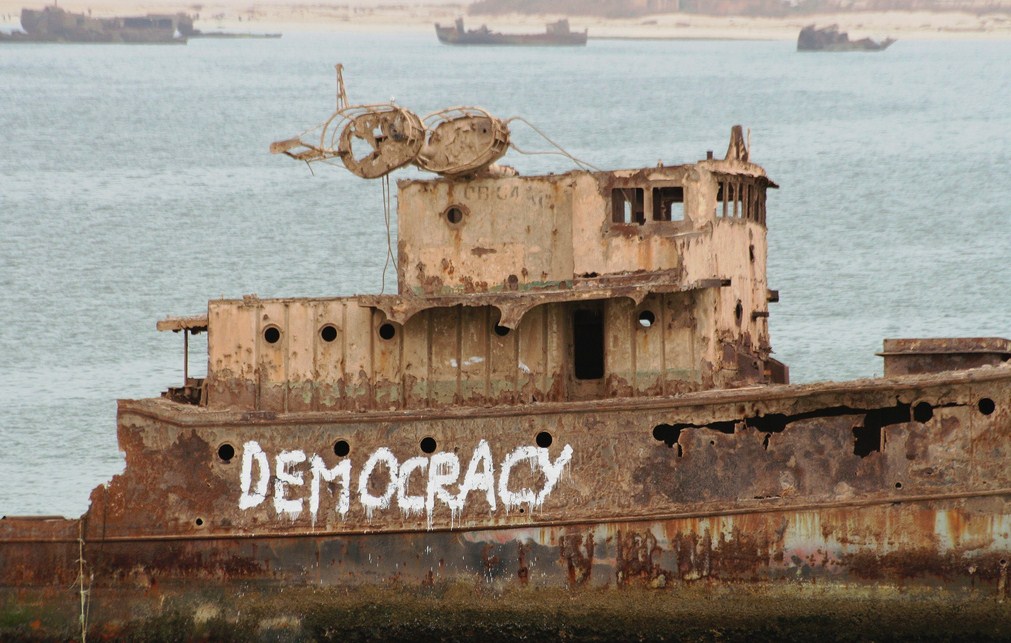 Most people have come to respect Democracy as a positive form of Government.  It is one of the forms of Government that lets “the people” have a voice in the laws that are created.  There is a dirty underbelly to Democracy that is currently being exploited in our current political system..

What is a Democracy? 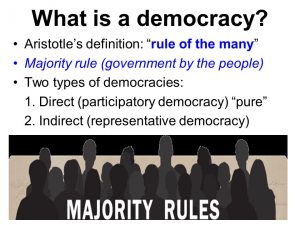 In a Representative Democracy people are elected to place the Democratic Vote on their behalf.  In theory, the elected official is elected because they hold the same beliefs as the people they represent, thus voting in the manner in which their electorate would vote.

In both types of Democracy, True and Representative, the majority’s power is absolute and unlimited.  Any decision by the majority is final and the minority has no retort.   Because of this, True Democracy opens the door to unlimited Tyranny-by-Majority.

The United States is a Democratic Republic

A Democratic republic uses elected officials to place votes, but the entire system must run within a set of rules.  In the United States’ case, the most basic set of rules are the Constitution.  This means that regardless of what the majority votes, it is unenforceable that the outcome will be outside of the rule of law.  This is an important difference and its what keeps the Majority from absolute tyranny over the Minority. This protects the Minority because of the rights instilled by the Constitution.

The Challenges With Our Democratic Republic

As we go into the Presidential Election, we are starting to see the dirty underbelly of Democracy.  With a 24 hour news cycle and social media breaking complex issues into Memes, we have watered down the complex issues of government and have politicians running on platforms that cannot be enforced because of the Constitution and our more granular laws.

With the light-speed pace of the media, exploiting one line statements as a political platform, we are leading people to believe that they are educated on the topics relating to government, while misleading them in the political direction of the news source itself.  There is a quote that says “today, the people use the news like a drunk uses a light pole…more for support than for enlightenment.” With websites so easily created and articles shared on social media, just about anyone can now become a “news source” and have absolutely to culpability to the truth.  This instills misinformation in the minds of the voter.

The Challenges With Our Democratic Republic 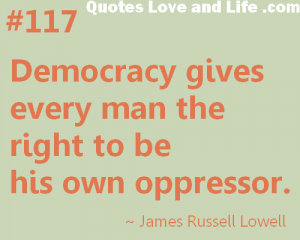 Because, in America we let almost anyone vote, it has become obvious that the influence put forth by making headlines (regardless of the truth) influences the group of people that generally do not follow politics closely.  We must be honest with ourselves and acknowledge that a large portion of the United States do not spend a lot of time learning the background and details of the political arguments.  This, by definition, is ignorance.

Because we should be able to agree that a large portion of the population receives their political views in a myopic manner, we must acknowledge that the purposeful manipulation by the political candidates can put the wrong person in office.  Because generally, we see approximately only 60% of the population vote in Presidential Elections, many citizens realize they do not possess the intimate knowledge (of the current political landscape)needed to make an educated vote.  The new challenge that we face is that a political candidate can now empower a large portion of the population (the other 40 percent), based off of talking points and politically unenforceable views. This lets people running for political office manipulate the vote.

The Downfall of Democracy

The downfall of Democracy is sure to be the fact that every vote is counted equally.  The ability to appeal to the ignorant and mobilize their vote dilutes the vote of the politically savvy voter.  From advising the ignorant to vote, you can control a larger portion of the outcome. This has been a political strategy for decades, many with the best of intentions, but still manipulation of the system.  From MTV telling all 18-21 year old’s to vote, to busing in citizens (who would otherwise stay home) to the polls, our Democratic system has been exploited.  Although this was implemented by the Democrat party, it is now become commonplace in both political parties.

How Do We Fix It?

The fix to the downfall of Democracy as we know it is NOT to push every citizen to vote.  It is not to make people feel guilty if they choose to not exercise their rights in the Democratic process.

If one wants to push for further involvement of the ignorant, push them to become educated.  Don’t push them to vote.

To have uneducated votes dilutes the vote of the people who follow what is truly happening.  As opposed to guilting someone to simply vote, guilt them to learn about the topics and policies.  Once educated, regardless of where they stand, then they should vote.