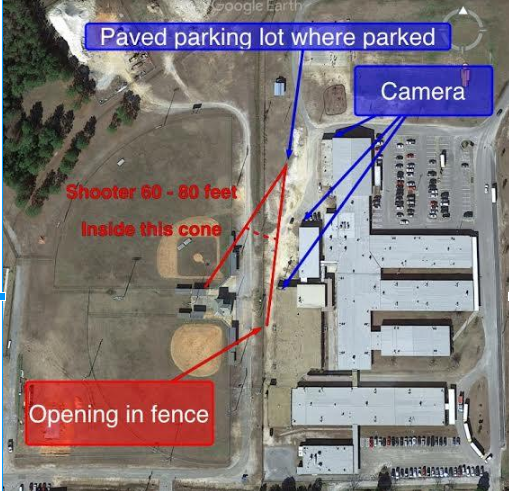 Teacher and Students fired upon at middle school.

A North Gulfport Middle School band director came under gunfire from unknown assailants as she left the school following a band event on Tuesday night. Kristina McRaney secured the facility and prepared to leave with her husband and three children, two of whom are students at the school about 8:00 p.m. The shooting started seconds after Mrs. McRaney turned on the lights to her vehicle.

“My family and I were shot at about 20 times tonight while on school property. Everyone is fine. The kids are extremely shaken up,” stated husband, Patrick. “We walked her to the truck parked by the band hall. The boys thought it would be fun to ride to my car in the back of the truck. As soon as she cranked up and headlights came on, they opened up. I was sitting on the tailgate and saw the flash when she backed up. I laid over the kids and we sped off.” Fortunately all family members were physically unharmed.

Gulfport Police Department reports the incident as a “Weapon Law Violation” rather than attempted murder. After community outrage over social media outlets brought the matter to the attention of senior officials within the Gulfport Police Department, officers have stated that the shooting will be investigated further. Unfortunately for the community, the neighborhood surrounding the school is described as habitually plagued with gunfire.

The Gulfport small-business owner continued, “I cannot tell you how upset I am that this could happen at a school in the middle of Gulfport. No attempt was made to find the shooters. There were hundreds of kids there just an hour or two earlier. It could have been a slaughterhouse.” Mr. McRaney indicated that he was “very disappointed” in the police response so far.